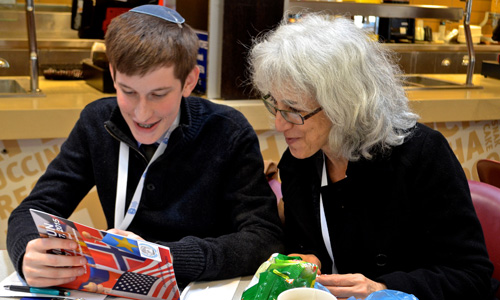 The role of the advisor is to be a teacher, a facilitator, and a confidence builder:

If you have taken on the role of the MUN advisor at your school, congratulations! You are now engaged in an educational activity of the highest order, and have an opportunity to truly affect the lives of your students.  What, exactly, does an advisor do?

Where can I find more information about the advisor's role?

What does an advisor do?
UNA-USA’s Global Classrooms Curriculum offers “Resources for Educators” HERE.

Where should my students do research?

Among other sources, look at:

How can I help them to do quality research on the internet?

Please scroll down to the bottom of this page and use the customized TIMEMUN search engine.

What kind of practice sessions should I organize for my students?

How can I help my students be better delegates at the TIMEMUN conference?

To be an effective delegate, students must:

What is the advisor's role during the TIMEMUN conference?

Every school must have an advisor accompanying its students to and from the conference each day. During the conference, advisors are encouraged to visit committees to see their delegates in action and to attend guest lectures, however they may not take part in any of the debates. The WBAIS teachers’ lounge is the home base for the advisors; food and drinks are served there, and advisors can also find there a quiet place to work and socialize with their colleagues. Any disciplinary problems with students will be referred to their respective advisor.

Is there a Code of Conduct and Dress at the TIMEMUN conference?

There is a Code of Conduct and Dress; please read it below.
Prep
Dates

We conduct training sessions to help delegates and advisors prepare for their roles in the TIMEMUN conference in February.

Schools are invited to three of five sessions to be held at our campus in Even Yehuda.Light snacks and drinks will be available.
Schools wishing to get additional training have three other options — Mentor Schools, AIS Volunteers and professional services such as AMBASSADOR.

Free training sessions at the American International School take place on Sundays, from 15:00 – 18:00. Each school may attend 3 out of 5 sessions. The dates of the sessions are:

How does a student prepare to be a delegate in TIMEMUN?

Before the conference, delegates should thoroughly research their country’s background and general perspective, as well as its specific policies on the topics they will be debating within their respective committees.

For example, if a delegate is representing Argentina on the Disarmament Commission, she should find out about Argentina’s history and current political, social, and economic situation, and what its past record has been on the issues to be discussed in the Disarmament Commission. What relevant treaties has it signed? What is Argentina doing about the issue already? What does it plan to do? Is the issue a particularly important one for Argentina, or one of its enemies or allies?

Delegates should then write a Policy Statement on their country’s position on the topics. This will be presented in the form of a short speech by every delegate in front of his commission, and also aids in the research process.

Once the delegates have a clear understanding of their nation’s position, they should formulate a plan of action for solving each issue. This solution can the country’s official proposed solution, or an original idea (keeping within the nation’s policies), or a combination of both. This “plan of action” is called a resolution, and must be written according to a certain format.This year, instead of writing entire resolutions, you will be focusing on operative clauses prior to and throughout the conference. The clauses will be then debated separately and will be added to a committee resolution after voting procedures. This change will stimulate committee discussions and will speed up the conflict resolution process. This change allows us to involve a maximum amount of delegates, and formulate the best solution possible.Prior to the conference, you will be focusing on preparing operative clauses destined to solve or alleviate the issue. In contrast with perambulatory clauses, destined to inform the committee, operative clauses directly tackle the issue by offering a solution.

WOULD YOU LIKE TO BE A COMMITTEE CHAIR IN TIMEMUN 2018?

You may be eligible to be a TIMEMUN chair.  Ask your school advisor about the application process.

to read the United Nations Association guide for students.

to learn how to write one.

Chairs write preambulatory clauses, which summarize the issues being debated. Delegates write operative clauses, which are a call for action on the issue in accordance to country policy.

Formal debating procedures are used in committee throughout TIMEMUN.

to learn more about these rules.

to see an actual resolution from the ECOSOC Committee in TIMEMUN 2016.

This is a customized TIMEMUN search engine. When you use this search engine, you will be searching ONLY the following sources, and all the results will be dependable and authoritative: